In the third century BC, Greak king Euthydemus I was the first European we know of who went to China, looking for gold. Later, the Romans dispatched embassies to China after a first travelling diplomat, Gan Ying, went west, almost two millennia years ago. Gan wrote about the Romans: “Their kings are not permanent. They select and appoint the most worthy man. If there are unexpected calamities in the kingdom, such as frequent extraordinary winds or rains, he is unceremoniously rejected and replaced. The one who has been dismissed quietly accepts his demotion, and is not angry”.

The Chinese called the Roman Empire ‘Daqin’, which means, confusingly, ‘Great China’. The Romans called the Chinese ‘Seres’, or ‘The Silk People’. They had been way off the mark, believing for centuries that silk grows on mysterious trees in India, until finally two Persian or perhaps Christian spies, dressed up as monks, smuggled silk worm eggs in a hollowed-out walking stick all the way to Constantinople around 550 AD. The whole two-way heist lasted 24 months, so they must have made it to China within one year.

The Pax Mongolica made the Silk Route organised and safe, with guards along the way, and the amazing yam system of fresh horses waiting for you, a day’s travel distance apart, available if you left your exhausted ones behind. Obsessive travellers in a great hurry could travel over 400km per day like this for weeks and weeks; though not many were mad enough to try. To top them all, Italian friar Giovanni da Pian del Carpine travelled to China using an icy northern route, keeping the Black and Caspian seas south of him. He was 65 when he started from Lyon in France in April 1245, with a letter from the Pope to the Khan. His companions soon gave up, but, with his Polish interpreter Benedikt, he developed a technique of bandaging the entire body to survive the cold, the bruises, the blisters, and they pushed on together from Kiev and made it after 3,500km in about 100 days. The way back lasted twice that and neither of them lived for much longer after the ordeal.

Also sent by the Pope, but preferring the less insane southern route, Frenchman André de Longjumeau left in the same year as Friar John (1245) and outdid him by going twice. Maybe he forgot something. Each time, the stretch from Syria to Mongolia (=north of China) alone took him a whole year of whipping his oxen eastward at an average 55km per day.

In the 13th century, the Great Khans invented the passport for such travelling maniacs, who could also use their Yam system and a long sequence of messenger-riders to deliver mail to China from Europe in two weeks. Mail to China in the 1980s went no faster, so three cheers for the Mongols.

My namesake Marco Polo set off for China as a teenager. He took a slow, sight-seeing four years to reach Beijing in 1275, and he must have liked it there because he stayed a quarter of a century and developed a bromance with Kublai Khan. And he should have stayed longer because when he came back after 24,000km in all, his hometown Venice was at war and he chose the wrong side and was put in jail, where at least he got the time to dictate his famous book to a fellow inmate. Polo did not bring pasta to Italy, because they’d already got it from the Arabs, but he is the first Western traveller to highlight the cultural sophistication of his hosts, and he brought back maps with, among others, the coastline of Alaska on them.

Jorge Álvares was the first European to sail to China in 1513, and that took the Portuguese captain only a few weeks since he started out from Myanmar. His countryman Magellan tried the hard way six years later, sailing around the globe the other way, starting at Sevilla, crossing the Atlantic south-westward around Argentina. where the majority of his men organised a mutiny against him and he had to use all his cunning to come on top of the situation. He executed and marooned most of his fleet’s captains and went on across the Pacific, but he got himself bogged down in the Philippines where he was killed by a local bamboo spear. Had he not died in a silly tribal squabble in the jungle, he would have made it to China, sailing around the world, in about 20 months. 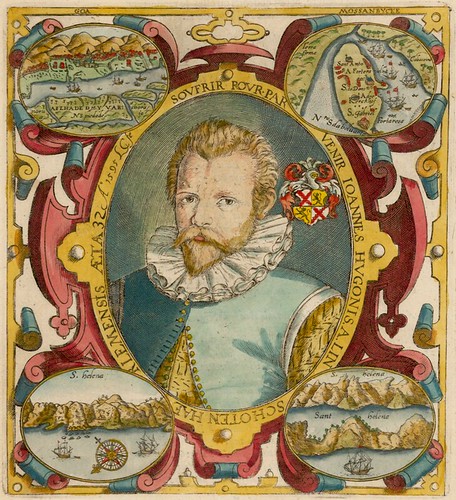 Only 4 of Magelland’s men (less than 2% of his original crew) returned to Europe on the last remaining ship, but the Portuguese just would not give up. Jesuits and traders followed and Portugal enjoyed a greedy monopoly on the route details, closely guarding their nautical info. But then, Dutch spy Jan Huyghen van Linschoten, working for the Portuguese in Goa (India), got hold of the maps and copied them page by page in the evenings. He then did not sell them to the highest bidder, but published the secret information in 1595 – hoping the world would benefit. That is when other Europeans started giving China a serious try.

The Spanish sailed almost immediately but they were chased away twice. It dawned slowly on the sailors that going south, and then east around Africa, might be a lot shorter – though it still meant sailing close to 30,000km, about three times longer than going over the steppes on those Mongol horses, the yam system now a forgotten memory. The Dutch set out next, to see if China could be as lucrative as Indonesia was proving. They invaded Formosa (Taiwan) in 1622 and stayed about 20 years. Their despotic leader Jan Pieterszoon Coen had picked up a few decks of slaves in South Africa whom he used to successfully fight the Chinese with. Then they would all work together on the plantations while Coen’s fellows could venture on to Japan. The first British ship arrived in China 15 years later, when Coen had already died of a tropical disease. In those days, the voyage from Amsterdam or London took about a year.

In 1866, an amazing race was organised from China to Cornwall between sixteen British ships. The top three were all Scottish-built ‘tea clippers’, the fastest ocean sailing ships back then. The three prize winners arrived in Cornwall within 90 minutes of each other, after 99 days at sea. Yes, that is hard to believe, but there were many witnesses and it sold many newspapers. A regular cargo ship would still take almost twice that long, but new travel methods were just beyond the horizon.

The big railway lines through Russia and India were finished by 1880, and now the 8,000km journey over land took about a month, while the Suez Canal allowed ships to get there in about a month as well. Add the two other colossal innovations of the age: steam engines and refrigeration, and it is clear when globalism really started.

Today, the Silk Road Trains run by China Railway Express end in Poland (where I lived from 1995), and now number about ten trains a day arriving in the European Union at the Polish/Belarussian border town of Małaszewicze. These freight trains take about two weeks to get here.

So, a final comparison: 140 years ago I could have got on an Amsterdam train and arrived in China a month later. Today, it’s twice as long: the flights Warsaw-Yueyang will take 24 hours and the visa bureaucracy has lasted 2 months.

But now I have my date: I will arrive in China on the 13th September 2018. It was the cheapest flight available because superstitious travellers do not like to land on the 13th.