There’s a kindergarten where I’ve taught three times now. The first time I came in, the kids broke into a collective minute of inhaling, in utter amazement that someone of such altitude and with such a big nose could even exist outside of cartoons. One girl stiffened in paralytic terror, and turned her head around faster than a fidget spinner. She had to be carried out.

The second week, some of the brats had half-forgotten what I looked like, while others had dreamed of me in the small hours of every night. They now mainly jeered and stamped their feet. The little girl projectile-cried tears at me and had to be carried out. You’d think I was a golem.

By the third week, my goofing about, falling off my little chair at every high-five with the kids, had disarmed them, though a few were still too stunned to speak. The little girl, carefully held on her teacher’s arms this time, and carried only a yard or so into the room, halfway through my class, again screamed her lungs out and had to be rushed away with legs kicking wildly in the air as something out of The Exorcist.

My theory is that she must have been exposed, at her tender age, to a Schwarzenegger film, against all common sense, and will now always have Caucasianophobia. This was a common and justified condition in colonial times of course, but today it serves nobody.

My slightly older female students are to be found in primary school, where I teach six huge classes of eleven-year-olds two days a week. Typically, the taller girls are better at English than the other girls, and they all outperform the boys. They tell me I am funny and want to touch my hair; they blow me kisses and take selfies with me, while I turn their school day into English language chanting and grammar competitions. They like me a lot and vice versa.

And, finally, there’s the Girl’s College. 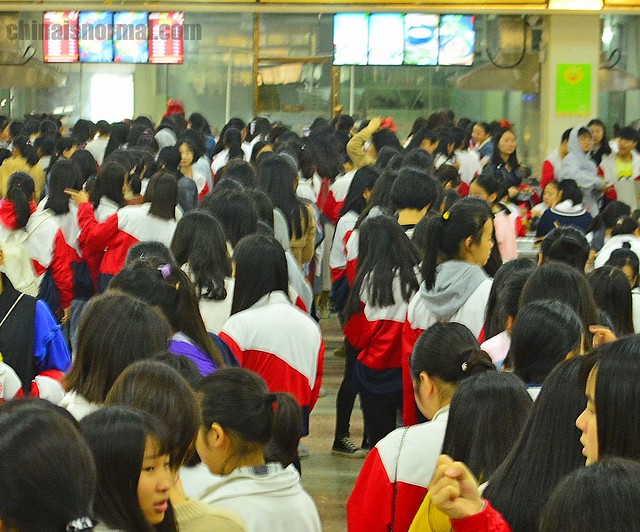 College girls shuffle to the brains buffet in their canteen

I come to this new weekly job at the end of a month of living on my own, in which I have watched too many B-films, and so I suffer from Movie Cliché Syndrome (MCS). The Girls’ College, on the outskirts of this metropolis of five millions souls, consists of a dozen huge buildings where thousands and thousands of girls, all around eighteen years of age, live and study for three years. Where were these places when I was eighteen? Not in Yueyang as it happens, because this huge complex is brand-new, and every wall I lean against whitens my sleeves with builder’s dust.

I am already nervous for this first class as I board the Didi (China’s answer to Uber). “We’ll never make it in time,” I tell the driver in my Urgent Voice, just for the heck of it. He knows no English. I pass him the address on a piece of paper. Every town has an Elm Street.

The college girls, like most women in China, are obsessed with being pale, so they plaster their faces in whitening cream to achieve that extreme contrast with their eyes and hair. When it’s too hot for long sleeves, their arms get it, too. They don’t just smear, but literally beat the stuff into their arms with their hands in a collective, masochistic ritual. I’ve witnessed this all over Yueyang already. The Street Sweeping Witches who swarm out over the city in the mornings are extreme examples; compared to these hags, the college girls are amateurs merely dabbling in the occult. 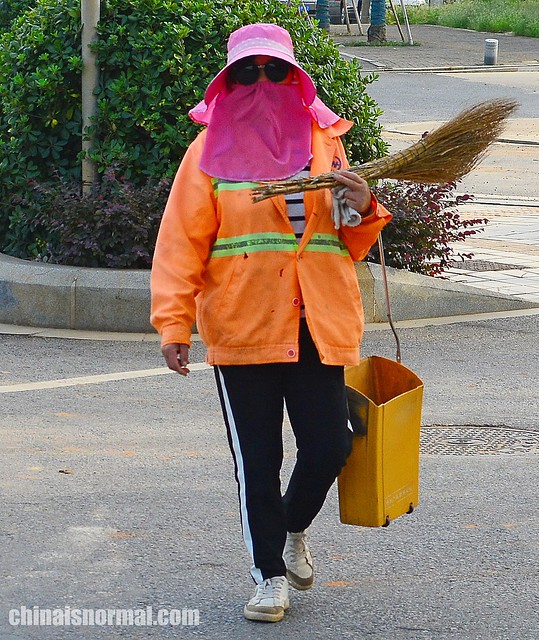 Street Sweeping Witch: one of the Undead roaming Yueyang.

In the rain they run under umbrellas; in the sunshine they run under parasols. Like vampires they scurry out of daylight, into their enormous canteens, dormitories, and lecture halls. In this part of China, women do not wear makeup or perfume, and now, for my early morning classes, they turn up with long and unkempt black hair, in whiteface, all one hundred and fifty of them. They cram themselves in this faraway auditorium, somewhere in the city’s outlying wetlands. I have a bad feeling about this. It’s like the casting day for an Asian horror film and I find it most intimidating. I’m getting too old for this shit.

They greet me by slow-stamping and whistling and shouting “SING US A SONG” and I almost freak out. “WHO LEADS YOUR COVEN?” I want to shout back but there would be no answer; this is a communist country where Power comes from the collective. “Why are you doing this to me?” I whisper. Margaret Atwood said it best: “Men are afraid that women will laugh at them. Women are afraid that men will kill them.” And I sympathise with the men as it hurts to have a large group of strangers roll over with merriment just at the sight and sound of me. It hurts. But with Lawrence of Arabia, I tell myself, softly, “the point is not minding that it hurts” and this, together with other classic movie lines, gets me through the day without obvious mental damage.

I introduce myself as Chucky. Wanna play? 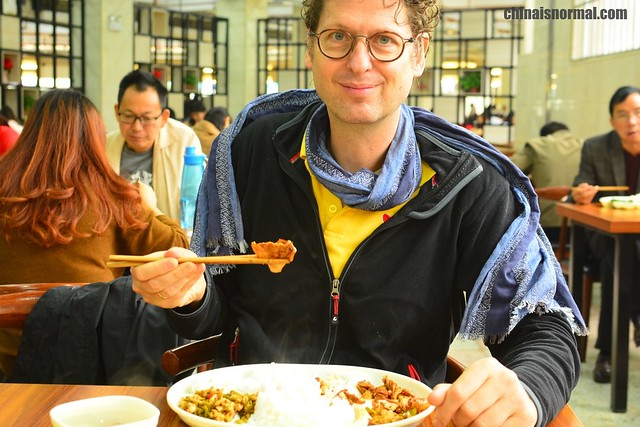 Lunch, delicious, tasty Chinese lunch, takes place in a canteen the size of Heathrow. Here, all the girls eat brains and then walk off somewhere to have a collective nap, no doubt suspended from ceilings, their backs arched and elbows bent backward. I use the repose to prepare the next powerpoint and then make my way back to the auditorium for the afternoon session. It’s quiet. Too quiet. Nervously, I rush inside, and order my teaching assistant: “Stay here!” She sticks beautifully to the genre: “No way, I’m coming with you.”

Are they all dead? Not anymore!

In they stroll, the ghouls; shuffling, sleepy, slowly, their college uniforms the colour of oxygen-rich blood. “Now… where were we?” I ask them, avoiding eye contact, trying not to summon any demons on my first day. “We can do this the easy way, or the hard way.” I have prepared a class of mimicry vocabulary and coupled it to even facial skills useful for young women everywhere: I teach them to glare, sigh slowly, roll their eyes, grin disparagingly, and frown. They’ll thank me once these join their passive-aggressive arsenal. They banshees seem to enjoy the class but one can never be sure. I’m just doing my job, ma’ams.

I’m knackered when the fifth group scuffles in; they sit there, very still, with glowing black eyes set wide in their white heads, and with their long, loose black hair down their faces like an Asian zombie apocalypse. I have brought my Nikon, as I always do, to take photos of them, but I fear that when I get home, it will have only registered blurry apparitions. They repeat my vocab chants and grammar drills with the steady drive of an incantation and I’m only slightly relieved that the door is locked and the windows closed. Next week, with a proper script and a film camera, I could sit them around a gigantic Chinese Ouija board with just the 2,600 basic characters, while their bony hands slowly drag upturned wine glasses for a séance that will never end.* 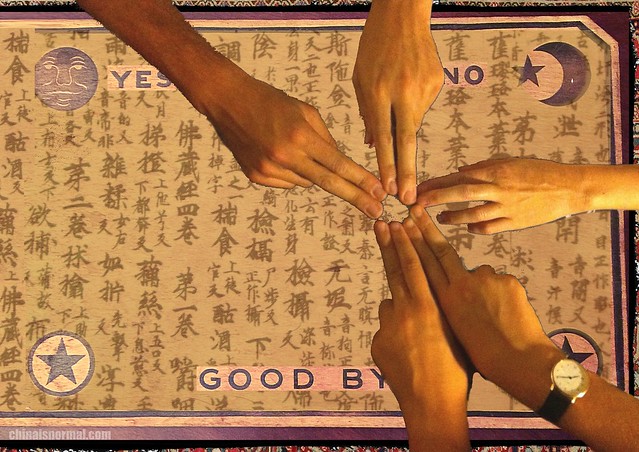 The travel version of a Chinese Ouija Board with only the most basic 2,600 characters. Just exchanging niceties with a quiet, deceased uncle can take days.

But today, my job is done and I am going home, and there’s nothing you or anyone else can do to stop me. “Follow that car!” I tell my cab driver, just for the heck of it. He knows no English. 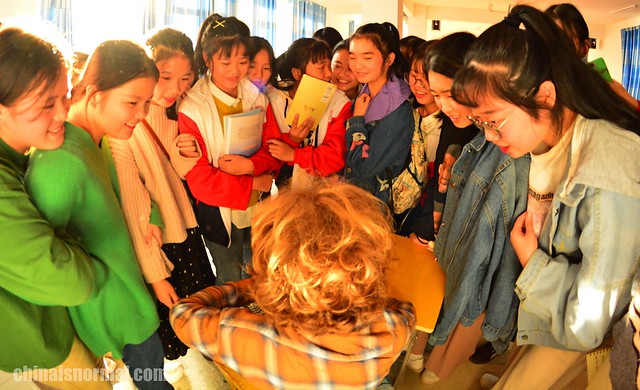 The college girls, having never laid eyes on a blond kid before, are laying eyes on my son.

(*Weirdly, the Ouija board is actually a thousand-year-old Chinese invention, used for necromancy under the Song Dynasty.)