The USA and the European Union do not have a single city with more than ten million inhabitants, and India has two. China has fourteen. Yueyang, with a metropolitan area population of about a million, would be the 15th biggest city of the European Union, or the 10th of North America. In China, it is number 136. Even Window’s spell checker has not heard of it, even though it is in the size league of Tripoli, San Francisco, Amsterdam, Naples, and Adelaide. So Yueyang is a provincial backwater that most Chinese would not know of, if it weren’t for a legendary tower mentioned by an 11th-century poet – more on this in a later post.

What first hits me walking around here is the warm late summer wind carrying 25 smells in all possible configurations, and perhaps I can name five of them, while the others are exotic mysteries. Especially my street with all the restaurants under the rows of trees is unbelievably ethnic and its scents are dense and rich. When, still in Europe, I first smelled durian, the beautiful, spiky megafruit with its complex stench of rotting pineapple and corpse, it blotted out all other smells, and at least two of my senses, for half a day. But here, whiffs of durian are just one element of the power aromas in South Central China. 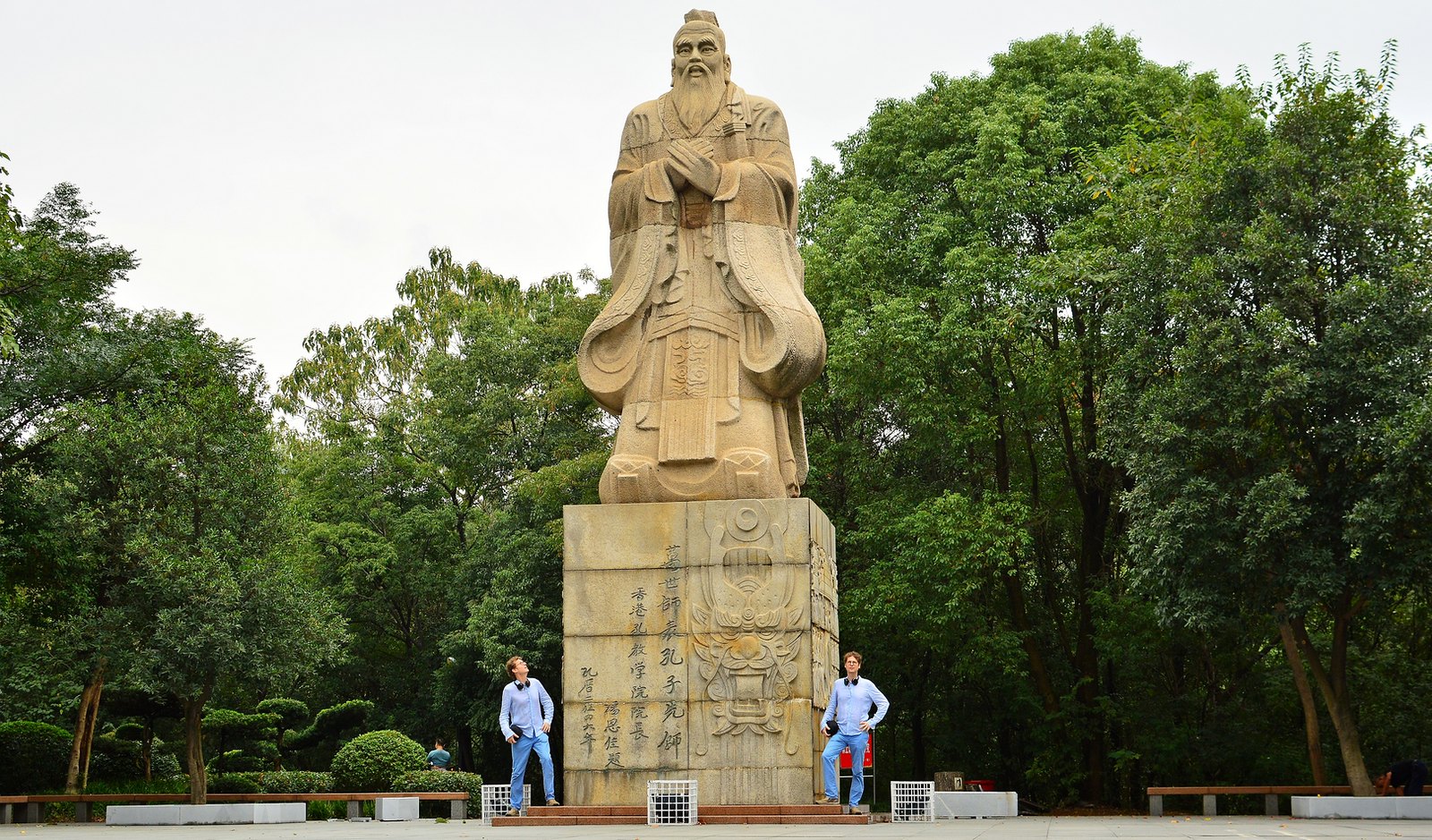 Every sign and street name and product label is in Chinese, so it’s the closest to living on another planet you can get. My association with Chinese writing has of course always been: restaurant. And here I was not far off since two out of three facades in my street are, indeed, restaurants.

My first pavement takeaway is superb, right in my street, and I immediately like this guy. He does the faster-than-the-eye wok juggling and noodle-flipping, but when the seasoning and salt needs to be added, he freezes and meticulously adds perfectly dosed knife tips for a precise and perfect blend.

As a Westerner, I cannot go unnoticed. I often walk around smiling anyway and that helps. Sometimes some girl or boy comes up real close to my face and tilts their head; left, right, studying my features closely like an art exhibit. Then they say something unintelligible; a conclusion, a remark, and walk on. Some people in shops or on scooters stop everything they’re doing just to follow me with their eyes, expressionless, mouth open, as if I were walking around in a green dress, toting an Uzi in my tentacles.

There is the odd old person straight from the rice paddies with the conical lampshade hat, traditional garb, gnarly cane. Some slum-like streets veer off the main drags, often downhill, surrounded, like everything in Chinese cities, by the huge new tower block monoliths.

In the subtropical afternoon, scores of people sit on pink plastic chairs on the pavement, or do the Asian squat with their heels on the floor, like they’re taking a dump under a shady tree. Men play Chinese chess (Xiangqi) in groups, women play poker, while grandfathers stroll proudly to and fro with their tiny grandkids.

The downtown area where I live has an area of six-meter-wide streets, six floors high, with laundry and electrical cables strung between the facades, above which you see only a sliver of sky. This brings cool-ish shadow and warm-ish draft winds. Especially women panic when they’re in the sun, and hold newspapers, carrier bags, or parasols over their heads even when they dash the ten yards from the bus stop to the shop. Being as pale as possible is the key to perceived beauty here.

The three-wheeled moped-trucks with flapping parasol sunroofs rattle by every so often amongst the shiny BMWs and Hondas. Many of the Chinese car brands tout fake leather and fake wood inside, like some retro-1970s low-budget movie prop. Traffic involves what the Chinese euphemistically describe as ‘weaving’, but in reality is rude and suicidal vehicle demolition. They cut each other off, block the fast lane for a sudden U-turn, run the red lights to squeeze past crossing pedestrians, and toot like it’s all part of a frenetic musical performance. And when confronted they tell me to check out Shanghai traffic.

The Confucian subtlety often leaves me Confuced. The school tells me I’d have the first day off. I run this by the boss: “I have tomorrow off, right?” And she goes “You know, soon you’ll have three consecutive holidays coming up.” This keeps hitting me: the myriad phrases to avoid saying ‘no’ to people. “Can’t I do it this way?” -“Many have found that challenging.” “Are these students really prepared for this advanced grammar?” -“It was perhaps explained to them in June.” Even official applications, requests or emails with pressing questions are never turned down, just left to be forgotten at the bottom of the pile when the answer is negative.

When the policeman had to turn down my residence registration at the station – to be done within 24 hours of arrival – because the one Yueyang copper who deals with that had gone fishing for the weekend, instead of an apologetic smile and a ‘come back Monday’, he suddenly had the weight of the world on his shoulders, slowed down his movements, became absent-minded, spoke softly in hypotheticals, hoping I’d take the hint, which I did. I was going to break the law but it wasn’t my fault. When I said I’d be back Monday he was suddenly all relieved smiles and handshakes again from behind his 1980s desk full of dead insects.

Of course, this odd interaction model avoids open conflict, and there is a lot less drunken shouting on a Saturday night in the centre here than there is in my Polish and Dutch hometowns.

A similar subtlety occurs when my colleagues want me not to talk to them, because they’re busy or on the phone, and they show very briefly a bent index finger. Blink and you‘ll miss it and then they will not show it again, or tell me to shut up, but sit through what I tell them, boiling inside.

Being a teacher means interacting with the locals every day. I have small classes of four-year-olds, but also an intimidating group of 120 from an all-girls’ college, who show up in their school uniforms, the bottom part of which is a tartan miniskirt, and greet me by yelling in unison: “Mark, Mark, sing us a song!!” Many of the students have never seen a Caucasian in the flesh. Some of the little ones sprint out of the classroom in a panic at the sight of me. When I take out my octave mandolin for a sing-song, two boys break out in tears – and that was even before I started strumming. 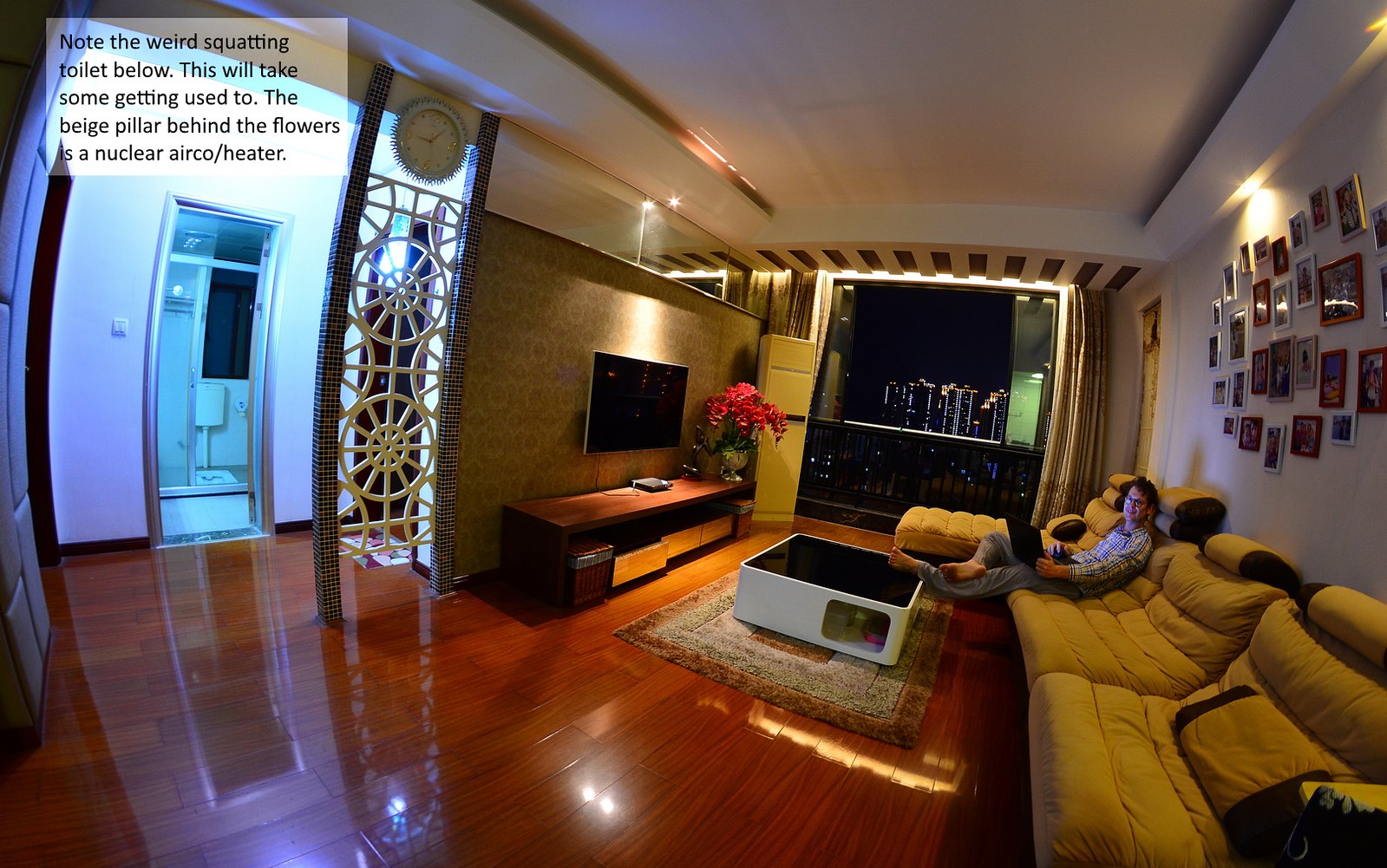 Walking to my apartment in the evening, I savour the same mellow yellow street lighting that I’ve grown so fond of in Poland, but topping this, all the shop fronts are lit up in primary colour LEDs displaying the wackiest calligraphy and logos. It seems like a big festival is on all the time, every night, in every street. By contrast, how dull and 19th-century Europe must look to them.

Sensory overload and all-new sights, sounds, and smells have inflated this first week to a mental month. My plan is working: slowing down time was one goal for this emigration. More soon!